Learning how to grow mushrooms is more straightforward than you might think.

Much of the same information applies whether you want to grow a small amount of mushrooms at home as a hobby, or want to start growing mushrooms on a commercial scale as a business.

Some of us grow up watching our parents in the garden picking tomatoes and carrots, but it’s still quite rare to see people growing their own mushrooms at home.

The idea of growing your own mushrooms can seem mysterious and complicated if you don’t have any previous experience with it.

Don’t be intimidated by the idea though. Once you know the basics, growing your own edible mushrooms is just like growing any other fruit or vegetable.

In this article you’ll learn all about the life cycle of mushrooms, what types of mushrooms to grow, and how to grow them.

If at any point during this article you find yourself confused about the terminology being used, please refer to the glossary at the end.

If you prefer to learn from videos, then check out our YouTube video which shows you the easiest way to grow your own mushrooms at home:

Growing Mushrooms at Home or On Small Farms

Mushrooms can be a great way to diversify the types of crops that you grow at home or on your small scale farm.

In fact, people have been growing mushrooms in small indoor spaces for hundreds of years.

Mushrooms are very versatile and can be grown in all kinds of different environments and small areas.

You can grow mushrooms indoors in a spare room or used basement, or even plant them alongside your vegetable garden outside.

If growing mushrooms is something that you’ve always wanted to do, there’s no better time to start than right now!

Even if you live in an apartment, you’ve got enough space to start growing your own delicious and nutritious mushrooms.

Unlike conventional crops, there isn’t even any messy soil to deal with. So they’re perfect for growing indoors.

How to Grow Mushrooms

When growing mushrooms, you largely mimic the same life cycle that mushrooms go through in the wild. But with some key changes to maximize yield and other factors.

Growing mushrooms starts by obtaining spores or spawn. We already know what spores are, but what is spawn?

It’s any substance that already has mycelium growing on it which you can use to speed up your mushroom growing process.

Using spawn or spores, you’ll want to prepare a mushroom substrate. A substrate is any substance that mushroom mycelium can grow on.

Mushrooms are often referred to as the “fruit bodies” of the mycelium.

Different species of mushrooms grow on different substrates. Some aggressive species like oyster mushrooms will grow on coffee grounds, while others require wood to digest for energy.

The next step is inoculation.

This is when you introduce your mushroom spores or spawn to your substrate (also known as a growing medium).

Although not necessary, this is generally done under sterile conditions to minimize the chances of mold or other fungi species from competing with the mushrooms you’re trying to grow.

Once your substrate is inoculated, the next step is to incubate it. This typically involves putting your substrate in a warm dark place for anywhere from a few weeks to a few months.

You then place your substrate into fruiting conditions after the incubation period is complete.

This usually involves cutting open the bag that your substrate was stored in to expose them to fresh air. The substrate is misted with water throughout the day during this stage to keep it moist.

After a few days you’ll start to see pinheads (primordia) forming on your substrate. These will eventually grow into full-sized mushrooms.

The timing of your harvest will depend on the species that you’re growing.

Usually is simply involves gently pulling or twisting the mature mushroom caps away from the substrate that they’re growing on.

Some species of mushroom can be harvested and will grow back several times. Each wave of new mushrooms is referred to as a flush.

Once your substrate is exhausted of all its energy it stops producing mushrooms.

As you continue to reuse your initial mycelium to inoculate more and more batches of substrates, it will eventually undergo something called senescence.

This is a process of deterioration that all living things go through with age. It’s basically like old age for mushrooms.

The mycelium loses its strength and ability to grow and divide. Once your mycelium starts to get weak, you’ll need to get new spawn to start with or grow from new spores.

It’s important to understand the growing cycle of a mushroom.

You’ll need this knowledge to have the insight necessary to cultivate your own mushrooms.

When most people think of mushrooms, they are only aware of the stem and cap that appear. Not many realize everything that goes into creating the mushrooms.

This includes a complex network of mycelium that is often much larger than the mushrooms you see on the surface.

Mycelium is a network of cells that appear similar to a plant root system. Except mycelium is actually more like the plant and mushrooms are just its fruit

Mycelium has just one goal, to keep its species going. It does this by growing mushrooms to produce spores and reproduce.

In nature, the life cycle of a mushroom both ends in one way and begins in another at the same time.

This all starts when a mature mushroom drops its spores. Spores are basically the fungi equivalent of seeds for a plant.

Spores fall to the ground and mix with other compatible spores. This starts the growth of mycelium.

Mycelium can either be a single organism or several different organisms working together as a colony.

After the mycelium has had a chance to grow, it will start producing pinheads. These are small bumps that will eventually become mushrooms.

But first they go through another stage called primordia, which look more like miniature baby mushrooms.

Eventually the primordia grow into full-sized mushrooms which then mature, drop their own spores, and the whole cycle begins again.

Most Popular Types of Mushrooms To Grow

There are so many different types of mushrooms, and plenty of different options when it comes to growing edible mushrooms for yourself.

One of the huge benefits of growing your own mushrooms instead of harvesting them from the wild is that you can be certain you’re not preparing a poisonous mushroom.

(As long as you get your spawn from trustworthy sources!)

Some of the most popular mushrooms to grow include:

These are probably the most widely grown mushrooms by beginners. Oyster mushrooms are consumed less than button mushrooms in the West, but they’re very popular in Asian countries for everyday cooking.

They have an appearance that you may not have seen before in a mushroom. That’s because in nature they grow on the side of trees, so they have a large flat cap with little or no stem.

If you’ve only ever eaten one type of mushroom in your life, we can almost guarantee that it’s this one.

These mushrooms are actually all the same species. The only difference is how long they’re allowed to grow before being harvested.

When these mushrooms first appear from the mycelium, they start off as button mushrooms.

As they get a bit larger, they develop a brown color and become what is usually categorized as cremini in shops.

Finally they fully grow into a portobello mushroom. These are the big brown mushrooms with dark gills underneath that are often sliced up or grilled whole. They have a tougher, more meaty texture.

Shiitake mushrooms have a smoky, earthy flavor and a texture similar to portobellos.

In addition to being delicious, they also offer several health benefits including compounds that can help to lower cholesterol.

In stores, shiitake are normally sold dried. But eating them fresh is a real treat.

Enoki mushrooms are very small with long stems. They grow together in tight clumps. If it weren’t for their tiny caps, they would look almost like spaghetti!

Enoki are very compact so you can grow them without much space required. They’re typically grown in jars.

Maitake mushrooms are another variety that is both delicious and also has strong nutritional and health benefits.

Don’t be confused by this mushroom’s nickname “hen of the woods.” The name comes from its appearance which people say resembles the ruffled feathers of a hen, and doesn’t refer to its taste.

Maitake has a very strong, earthy taste and we’d recommend trying some to make sure you like it before you spend time growing it!

How To Grow Mushrooms

Each different type of mushroom has its own specific growing needs.

Shiitakes can be grown on hardwood sawdust or wood. White button mushrooms and portobellos need to be grown on composted manure.

Oyster mushrooms will grow on a variety of different substrates including straw, sawdust, coco coir and even cardboard or coffee grounds!

There are several ways that you can grow mushrooms indoors. It’s a very convenient way to grow your food and also super quick.

If it’s your first time growing mushrooms, you may want to purchase a mushroom grow kit.

Mushroom kits come with your substrate already inoculated and incubated, so they’re ready to start growing as soon as you get them.

All you have to do is open the box and cut a hole in the bag, and mist or spray some water on your kit each day.

About a week later, you’ll start to see little mushrooms emerge. And after two weeks they should be fully grown and ready to harvest and enjoy.

Starting with a kit is a great way to build your mushroom knowledge and get an understanding of the life cycle that a fungi goes through.

It allows you to skip the more difficult parts of the mushroom growing process so that you can avoid issues with mold or contamination.

Kits provide a foolproof way to have your first success with growing mushrooms.

You can check out oyster mushroom kits that we have for sale in the UK.

If you’re outside of the UK these kits are great too: 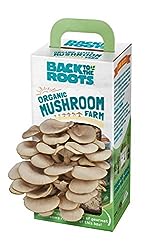 Grow Your Own Mushroom Kit

5 thoughts on “How To Grow Mushrooms: The Ultimate Guide”